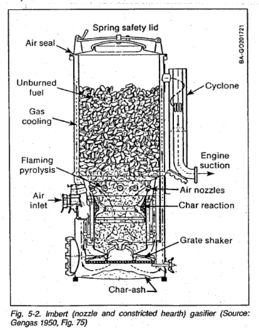 Wood gasification uses a process called pyrolysis to break down organic matter into its basic elements, carbon and gases. This process is done in a high temperature, oxygen limited environment to breakdown the wood into its basic elements.  The gas is then extracted, cooled and filtered and may be used as a fuel for direct heating applications or as a fuel to power a standard combustion engine. The gas produced by wood gasification consists of Hydrogen, Methane and Carbon dioxide, also referred to as 'Syngas' (Synthetic gas). It has similar properties to natural gas but is not considered natural gas.  The syngas has a different air-to-fuel ratio that must be taken into consideration when used as fuel for a standard combustion engine.

Syngas also has a lower power rating than natural gas (50%-60%), which must also be taken into consideration when selecting an engine or generator size in a power producing application. For example, a 10KW propane generator would actually produce about 6KW of power when run on wood gas.

What is Wood Gasification?

Using proven and efficient designs, today's wood gas generators can produce clean, abundant, and free fuel for many application including heat generation, home power systems, and emergency power systems when traditional fuels are not available or too costly. Let us help you put the power of wood to create free energy in your renewable energy system. 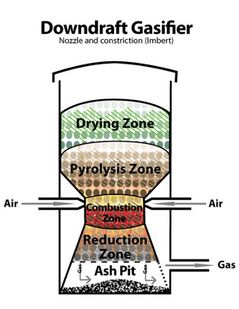 The process of producing energy using the gasification method has been in use for more than 180 years. In the early time coal and peat were used to power these plants. Initially developed to produce town gas for lighting and cooking in the 1800s, this was replaced by electricity and natural gas, it was also used in blast furnaces but the bigger role was played in the production of synthetic chemicals where it has been in use since the 1920s.

During both world wars, especially the World War II, the need for fuel produced by gasification reemerged due to the shortage of petroleum.[6] Wood gas generators, called Gasogene or Gazogène, were used to power motor vehicles in Europe. By 1945 there were trucks, buses and agricultural machines that were powered by gasification. It is estimated that there were close to 9,000,000 vehicles running on producer gas all over the world.

Wood gasification also regained popularity in the 1970's during the oil embargo which lead to severe gasoline shortages in the US. It seems that gasification is something that gains popularity during time of an energy crisis, only to be forgotten when the crisis passes. It then has to be rediscovered and relearned when the next energy crisis arises.  Today, gasification is commonly used in commercial applications, and is gaining popularity as a viable system for home power generation and emergency backup power systems.